What’s Better The Dewalt 12V Max Or The Black And Decker 12V Max?

When it comes to choosing a cheap 12v drill to use around the house or garage you have a lot of great options ranging from $30 all the way up to $100. The question is, how much should I spend and which drill will give me best performance for my money? Today are going to be comparing two drills from opposite ends of the price spectrum to see first hand the performance and quality differences between the two. We’ll be looking at the Dewalt 12V Max (DCD710S2) and the Black And Deck 12V Max (BDCDD12C). Both of these drills advertise very similar performance numbers, but the Dewalt costs over twice as much!

In general, Black+Decker tends to be a more non-professional homes use brand that is cheap in price and provides good basic functionality. Dewalt on the other hand specializes in more rugged high performance tools that are marketed towards heavy-use users with high expectations. The extra performance and durability of Dewalt usually comes with a 30-50% increase in price. 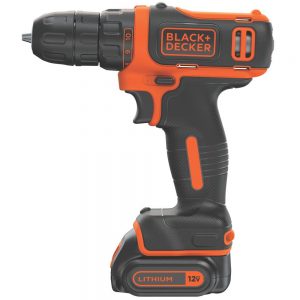 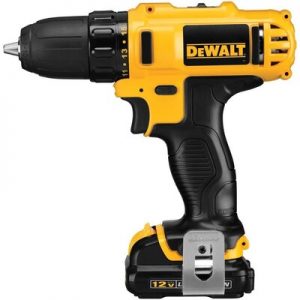 On paper both of these drills provide similar performance numbers that are impressive for their price. The Black+Decker does have a slightly lower power rating with a nominal operating voltage of 10.2 compared to the 10.8 of the Dewalt. We find that the Dewalt does feel more powerful overall despite the small difference in power on paper.

We believe a lot of the “extra power” we are feeling is due to the two speed transmission as it allows us better adjust our drilling speed to the specific application. For example, when working with a standard twisted bit the Dewalt was drilling holes noticeably faster in wood do to its higher RPM setting. We also found this to be true when using a spade bit as well. When drilling on steel we found that both drills performed well as they had the ability to operate at lower a lower RPM, which is recommended for drilling steel (You can find an entire RPM speed chart for a variety of drilling accessories and materials here).

When using the drills on simple wood screws we found both drills worked great, but the Dewalt was once again got the job done faster.

We were a bit disappointed by the Black+Decker 12V lithium-ion battery as they do not provide an amp hour rating for the battery itself. This left us in the dark on what exactly we were getting for our money. From our testing we concluded the battery was most likely just shy of 1 Ah. We also found it odd that Black+Decker does not offer Lithium 12V replacement batteries to purchase separate. They only offer 1.5Ah 12V NiCd battery packs instead.

The Dewalt batteries were as we expected them to be and worked well. This kit came with two 1.1Ah Batteries, which we really like. Extra batteries are easily purchasable in a variety of amp hour configurations with the most common being the 2Ah for approximately $40. 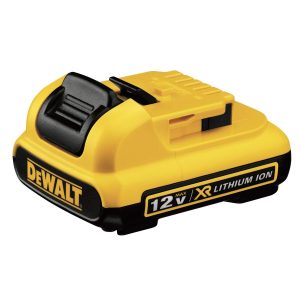 Great battery that offers almost double the capacity of the 1.1Ah batteries included with the Dewalt kit. A little pricey at around $45, but well worth it. They have a quick 30 minute recharge time and have virtually no self-discharge due to being a lithium-ion battery. Batteries these days are a lot better than they used to be.

If you click this link and make a purchase, we earn a commission at no additional cost to you.

The Black+Decker comes with a 2 year limited warranty. This is a pretty standard warranty and will cover any defects from the factory.

The Dewalt comes with a 3 year limited warranty with a 1 year free service contract. Dewalt is a lot more confident in there products durability, thus providing a much better warranty is no problem for them. Even under heavy usage you would be lucky to break a Dewalt.

We think that both of these drills have their intended market and represent those markets very well. Black+Decker has made a very inexpensive drill that provides great value to anyone who plans on using their drill for light use. The Black+Deck 12V Max is perfect for anyone looking for a drill to do simple tasks like build furniture from IKEA, hang a towel rack on the bathroom wall, put some extra screws in loose fences boards or hang pictures on the wall at their house. At $31 it will be a great value to you and great tool to have around the house.

If you plan on doing anything outside of home use like drilling through metal, wood working or any other type of heavy use application the Dewalt is hands down the best choice for you. You will get a reliable and durable drill that can withstand some abuse for less than $100. You can’t go wrong with the Dewalt and it will be well worth your money to upgrade from the Black+Decker. The included extra battery will also make your life a lot easier if you do use your drill for long periods of time.