There’s a time in every mans life when he looks at a piece of metal and says to himself… “this has potential” with a large grin on his face. We’ll that was me 6 months ago when I started this project. My goal was to turn two old propane tanks into a fully functioning badass reverse flow bbq smoker. I knew it would be a long road filled with a lot of obstacles, but I was ready for the challenge.

I set out and found two propane tanks form a friend of mine who worked at a propane yard. I got them for $150 and left with a smile on my face. 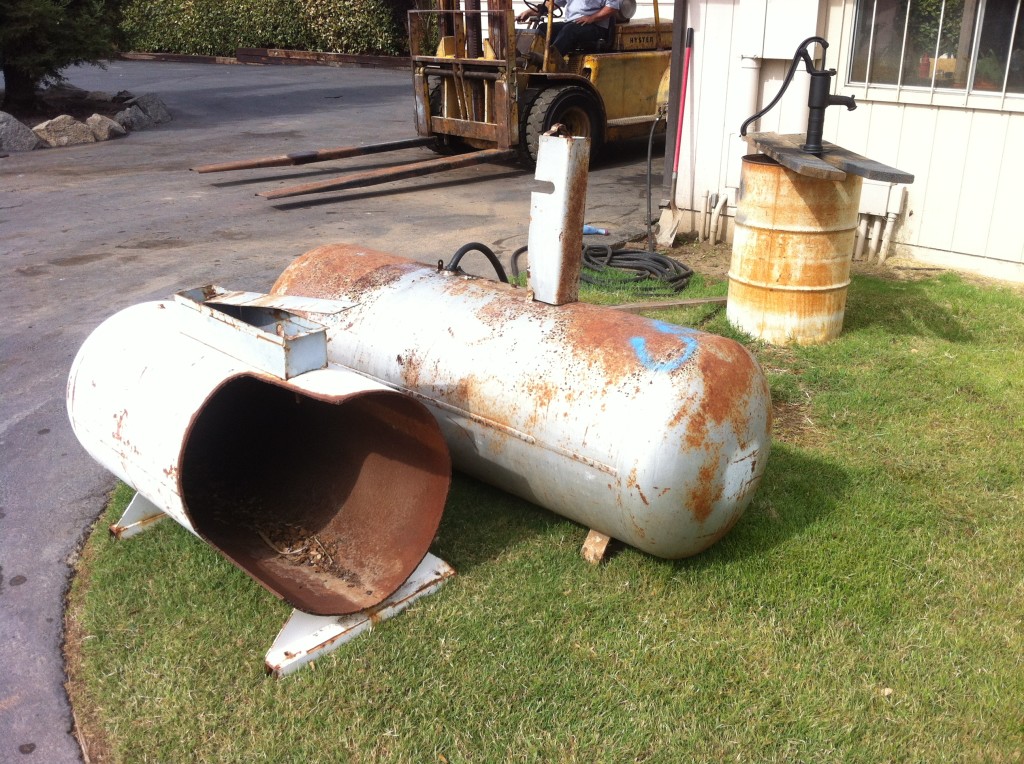 The idea was to build a smoker that looked like this: 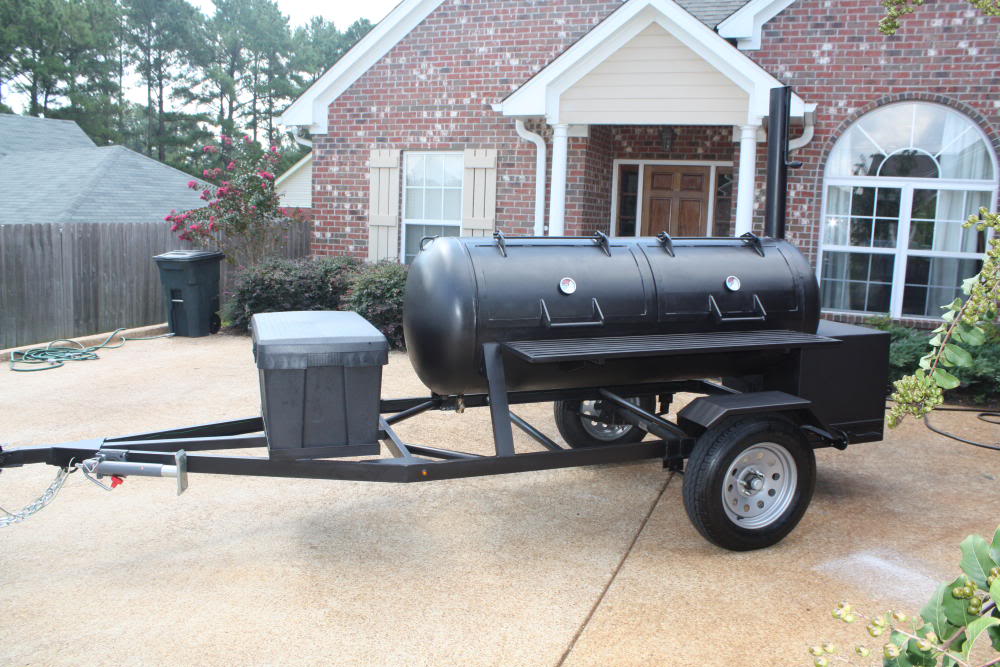 To the eye a project like this above looks very doable, but once you start you realize holy crap there is so much thinking and time that goes into making something like this!

Once I got my tanks home I wasted no time. I started with pulling the valves out of the larger propane tank and filling it with water. 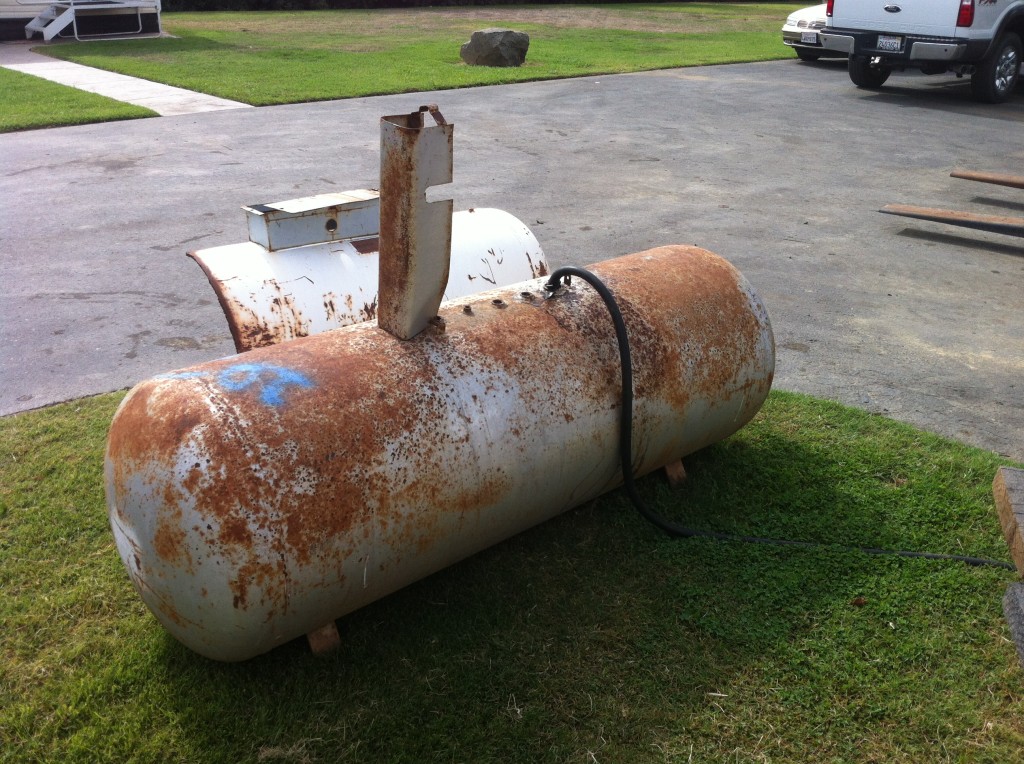 Next I used an air powered grinding wheel to cut a small hole in the tank so that the tank could air out and I could later start cutting into the tank with a plasma cutter without going KABOOOOOM! 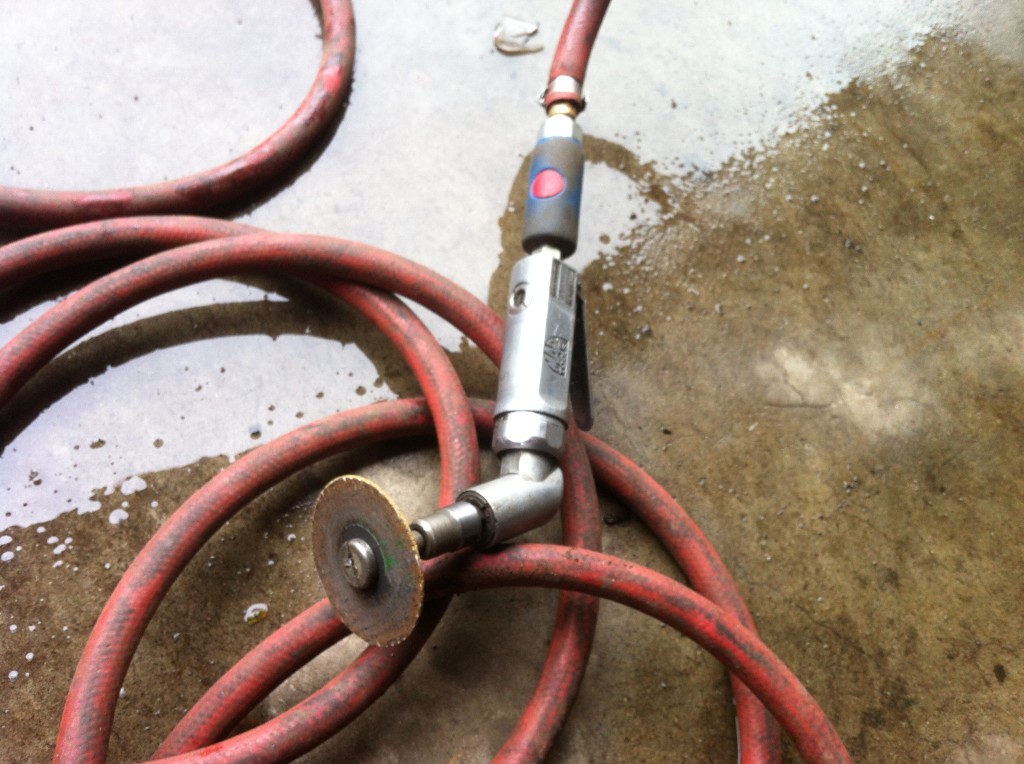 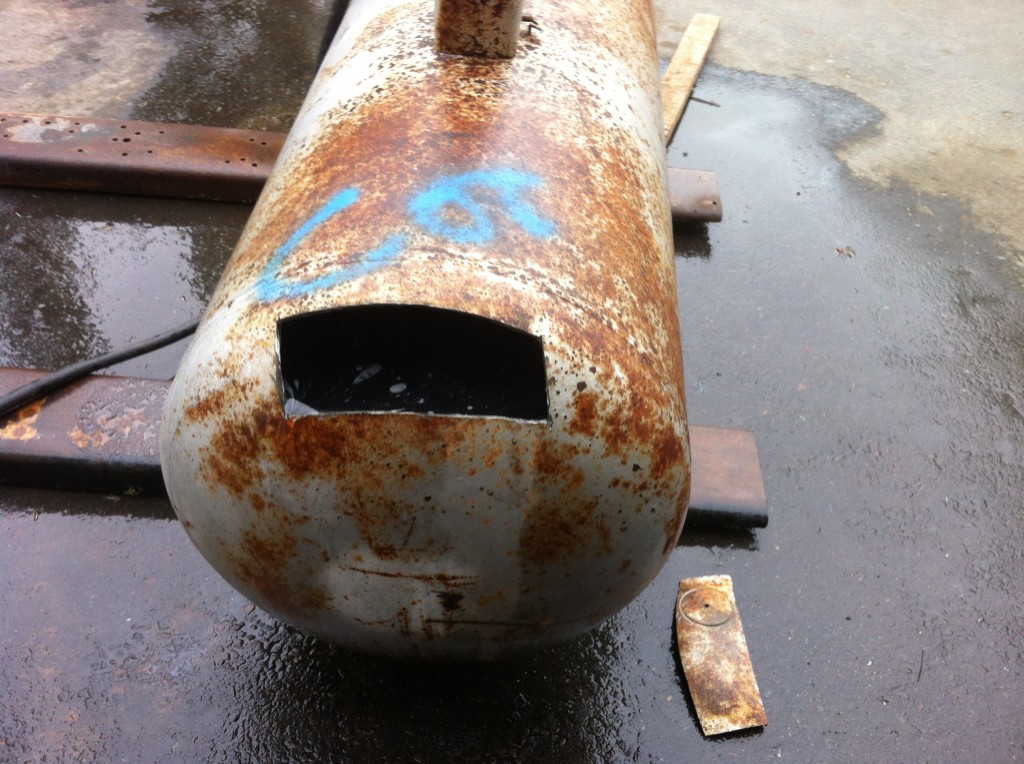 Next I set the large tank aside and let it air out since it still smelled like propane. I got the smaller tank and started making plans for the firebox of the smoker. My smoker was going to have a round firebox simply becasue I got this half a tank for cheap and didn’t want to spend $400+ for 1/4′ plate steel to build a square one. 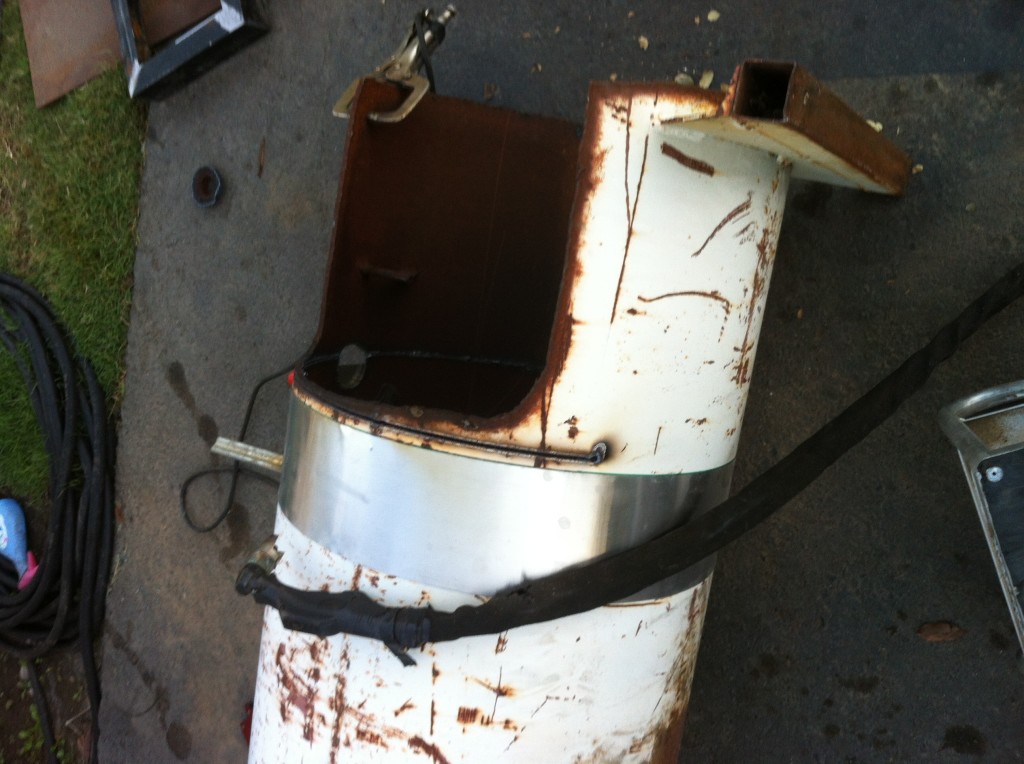 Next I fab’d up the square frame that would be my door for the fire box. I made it as big as possible so that I could throw chunks of wood into the firebox without burning myself. One of the problems with building a firebox that is round is that making a large door is difficult because you lose space for the door since you’re working with a circle. On the other hand with a smaller door I will lose less heat when I open the door to put in another piece of wood. So it works out both ways. 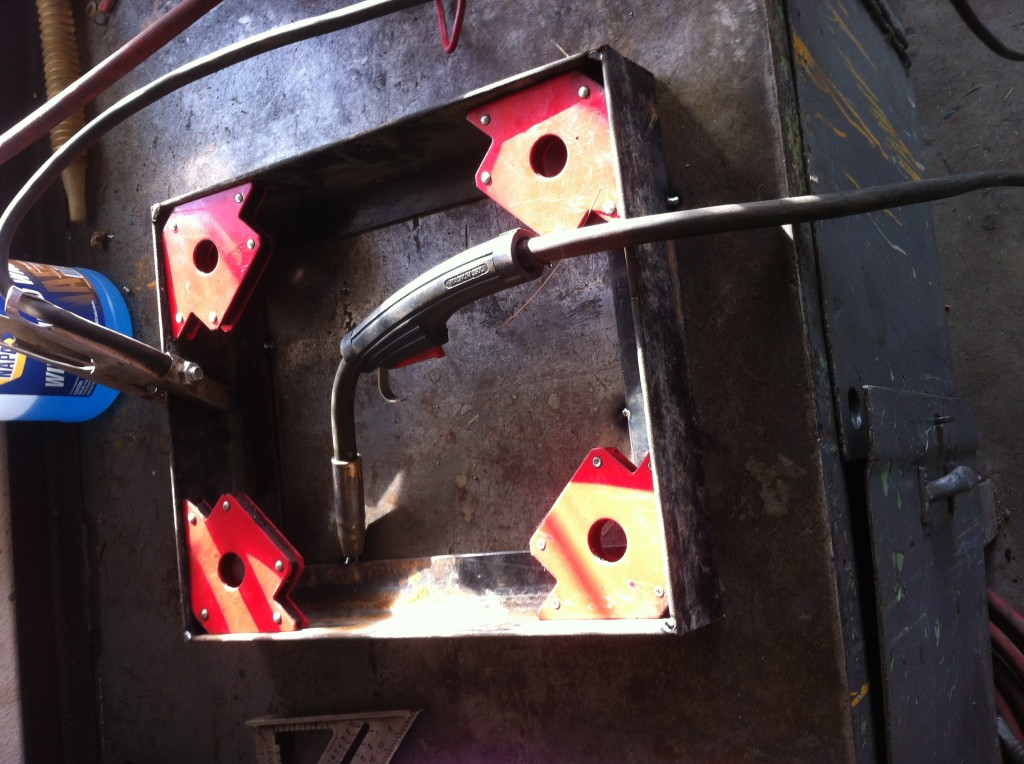 Once I had the frame made it was time to make the cut for the frame and weld it in! I fired up the plasma cutter and made one of those “I only have one chance at this I better not screw it up” type of cuts. It came out great! Here is the result! 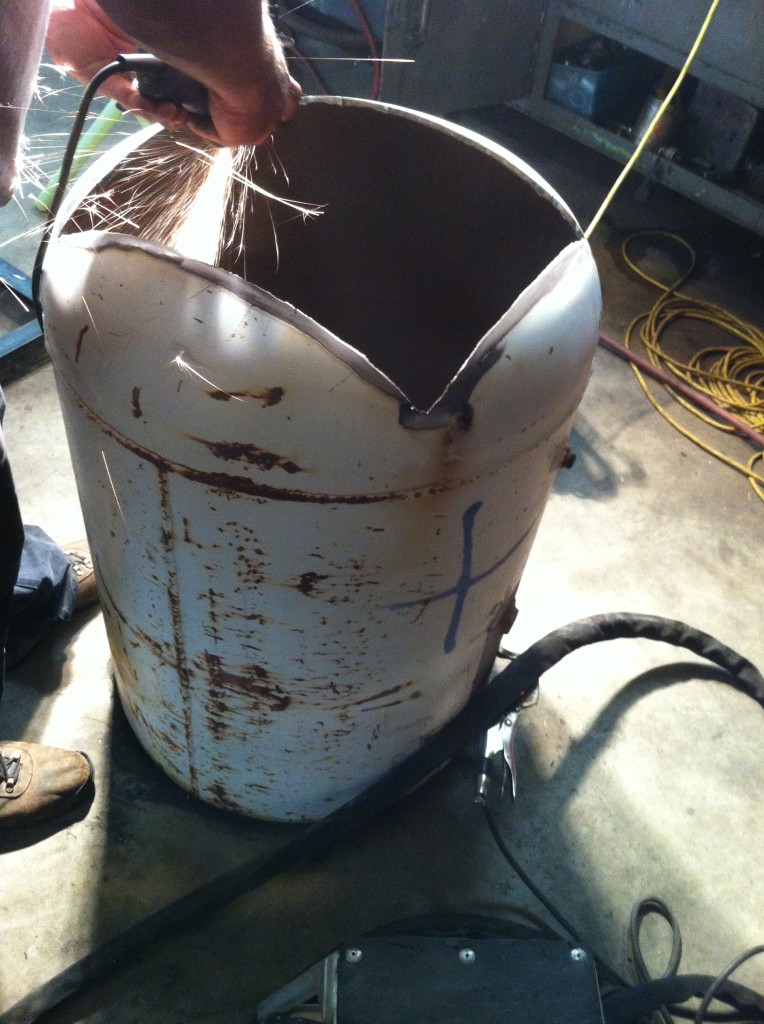 After that I welded in the frame and started making the door. For the door I used a piece of 1/4′ diamond plate that I found out at my grandpas place that he said I could have. I used the plasma cutter to cut it to size and placed it on the tank to see how it looked. I then realized that I was going to need some hinges for the smoker door as well as the firebox doors. I spent about $50 on some heavy duty hinges that I purchased online. I then started building the air vents for the smoker door. I needed air vents large enough to fuel the fire, but I needed to be able to cut of all air to the smoker in order put out the fire when I was finished cooking. I used the plasma cutter to cut out rectangles in the firebox door and then fab’d up a sliding system that covered the vents. Soon after this the hinges arrived so I mounted them on the firebox door and it was complete! This was the end result! (note: I plan to add a cool to the touch handle to the air vent so I can adjust it without burning myself). 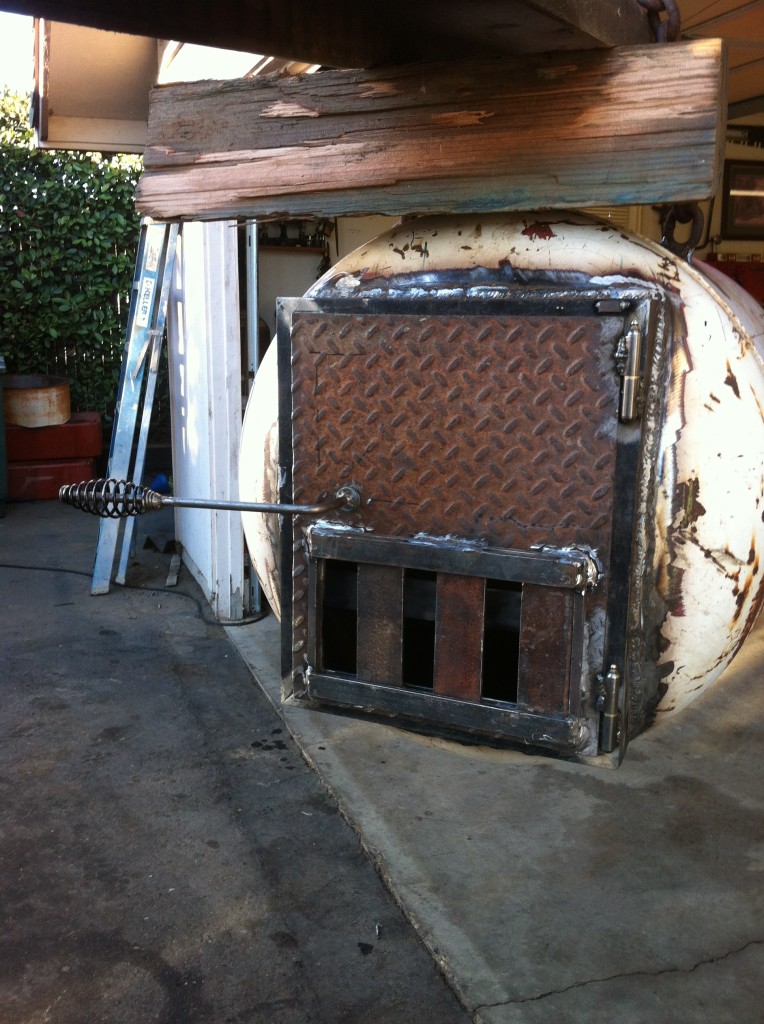 I then began working on the inside of the firebox. I created some metal grates using steel pipe. I cut a bunch of pieces all the same length using a band saw and welded them all together.After that I placed two pieces of angle iron in the firebox to hold the grates. I only tack welded these so I could easily remove them later on if I need to re work the inside of the firebox for any reason. (the picture below is the pieces cut up for the grates. More pictures of the grates welded together coming soon!) 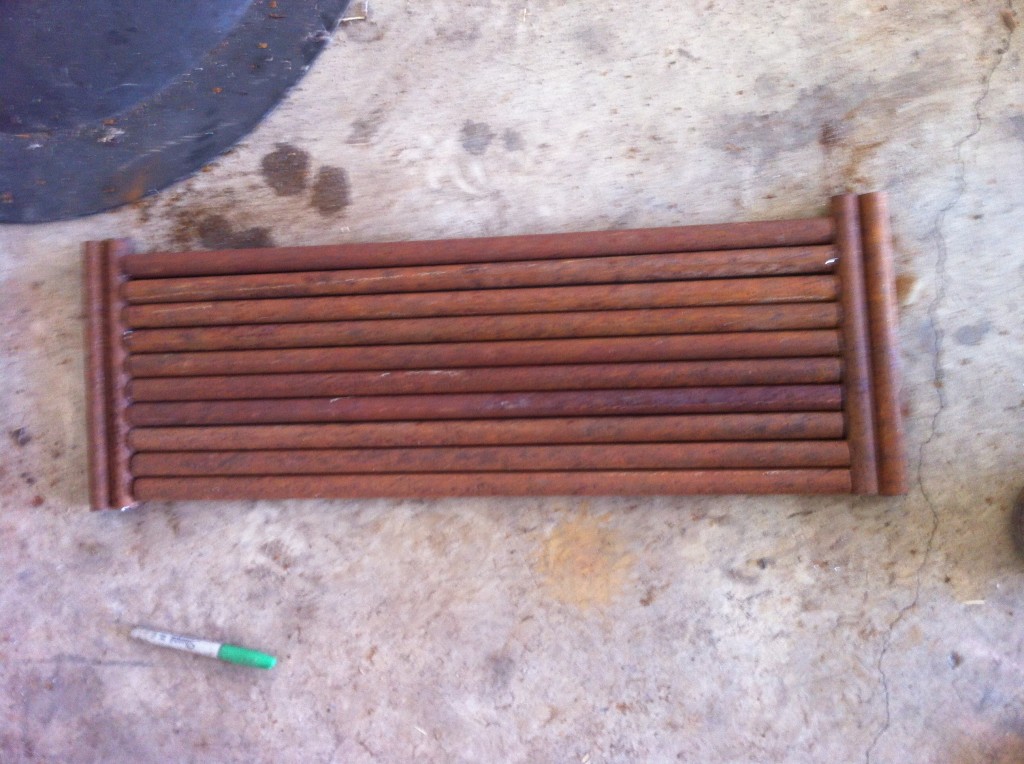 With the firebox finished I was super excited to get started on the cooking chamber! I marked out the door and double checked all of my measurements. 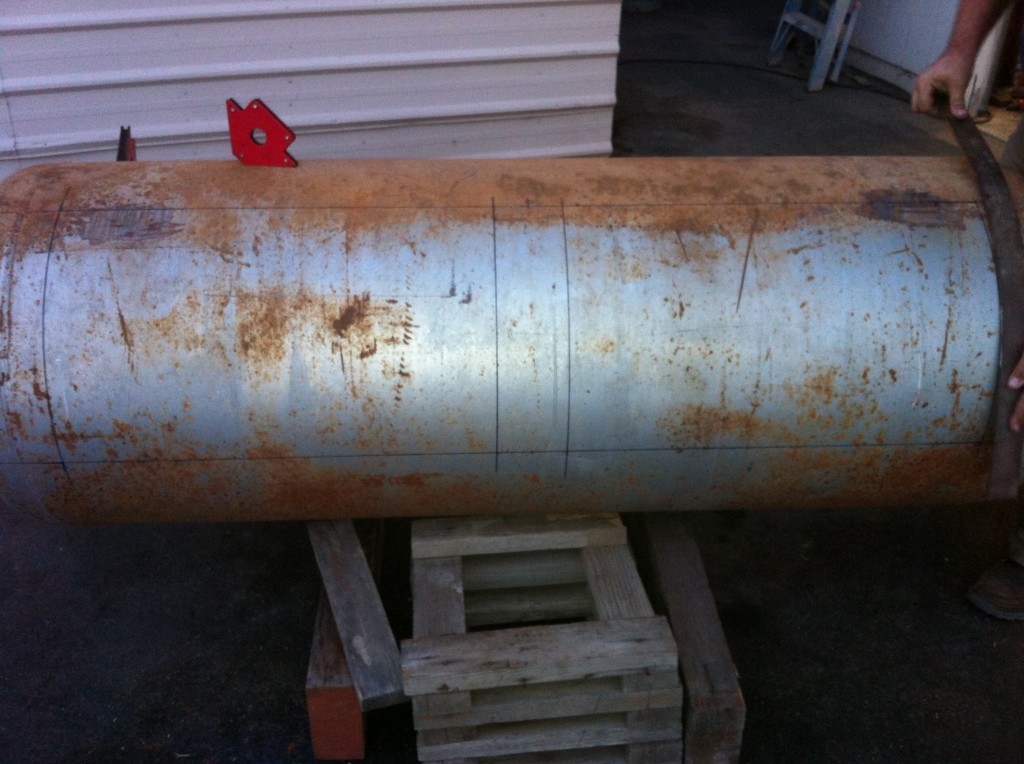 I then made the top cuts using the plasma cutter and then welded the hinges on before making the rest of the cuts so that the door would be perfectly aligned. (Look at how great those plasma cutter cuts came in! I used a rolling wheel for these! 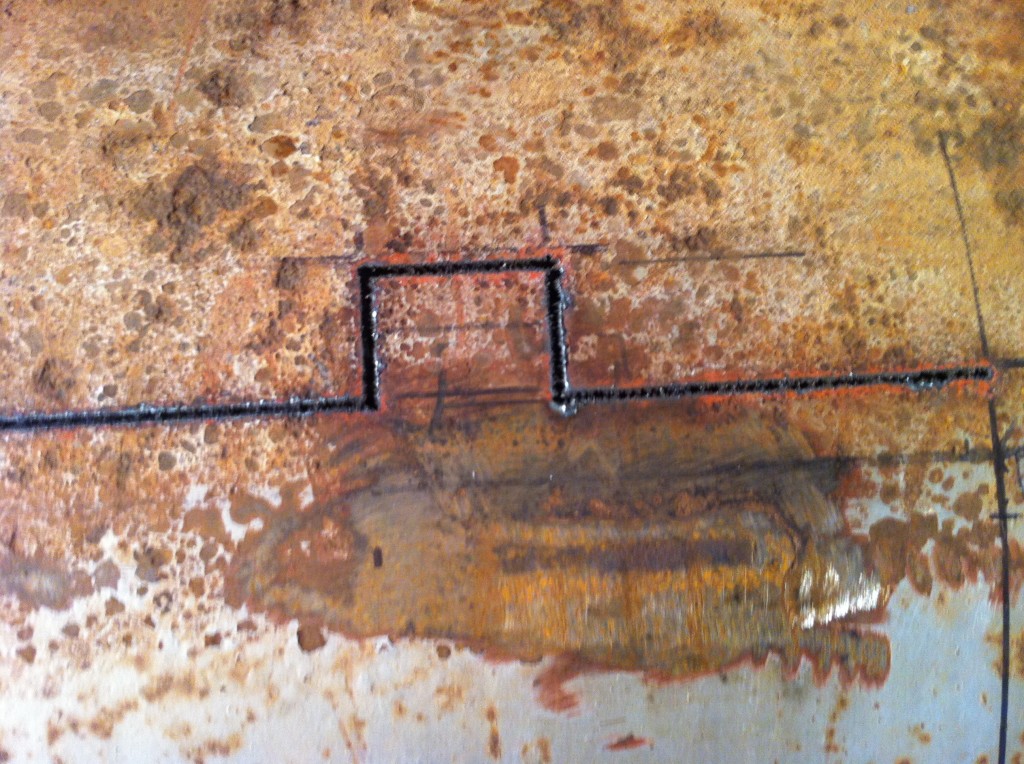 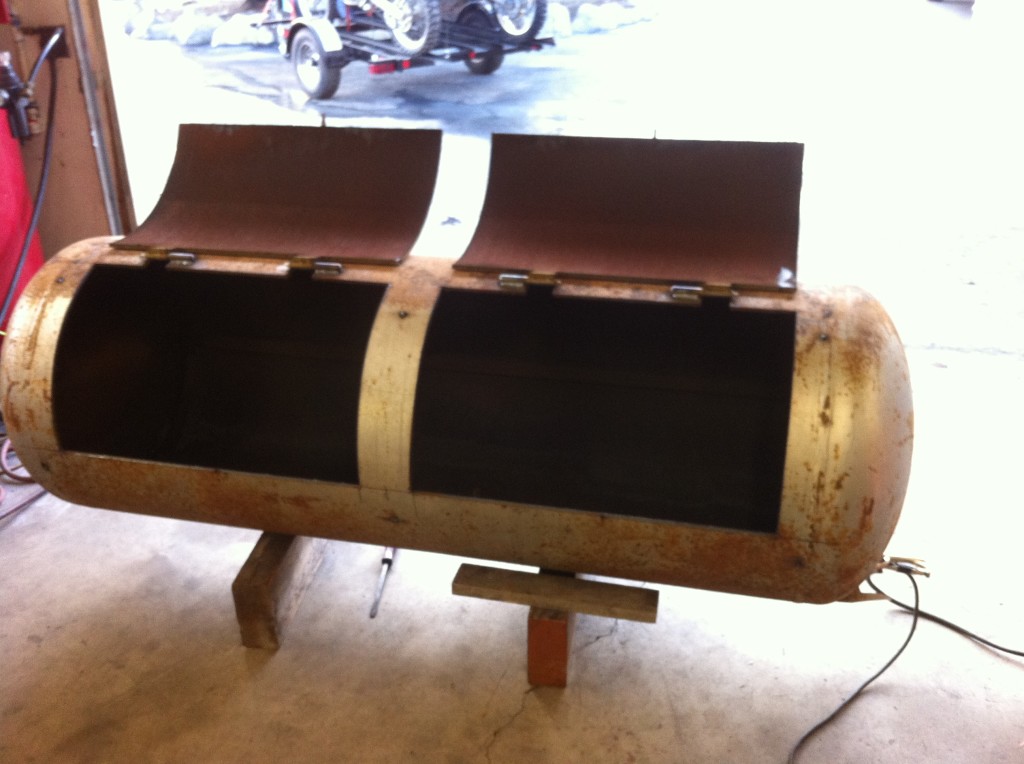 Here I put the two pieces together just to see how they look. So far so good! 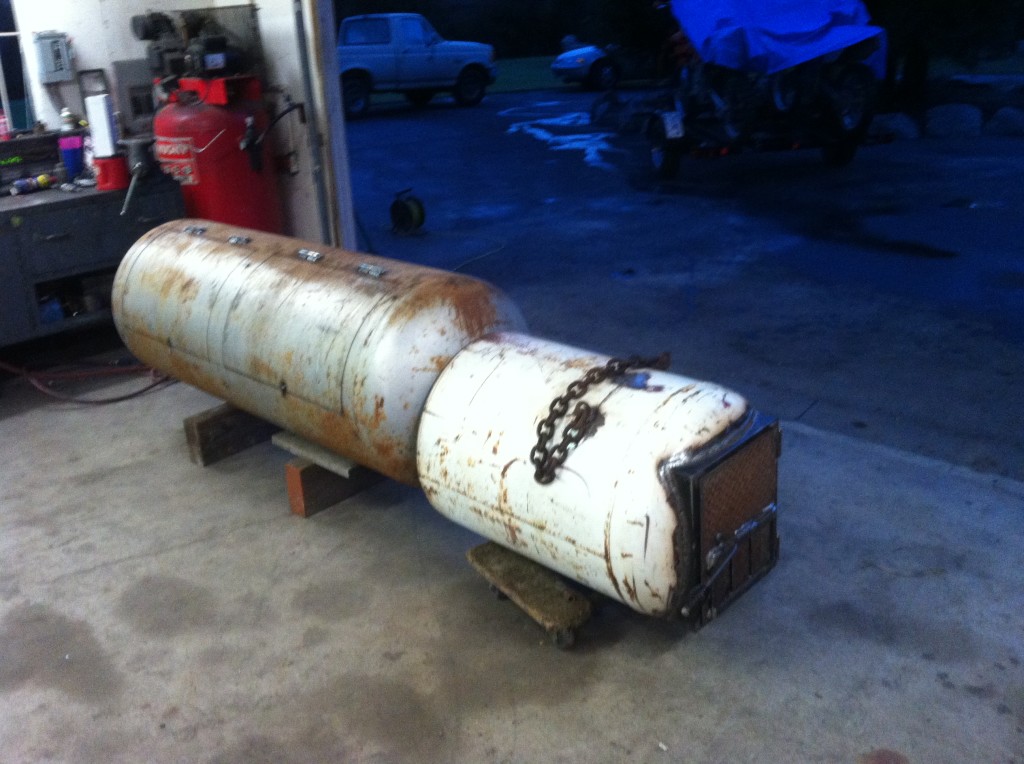 Then it was time to burn out the inside of the tanks. I filled them with a ton of cardboard and scrap wood and made them blaze! I plan on getting the tanks sandblasted once I am completely finished. This was simply to make sure there was no propane residue left in the tanks. 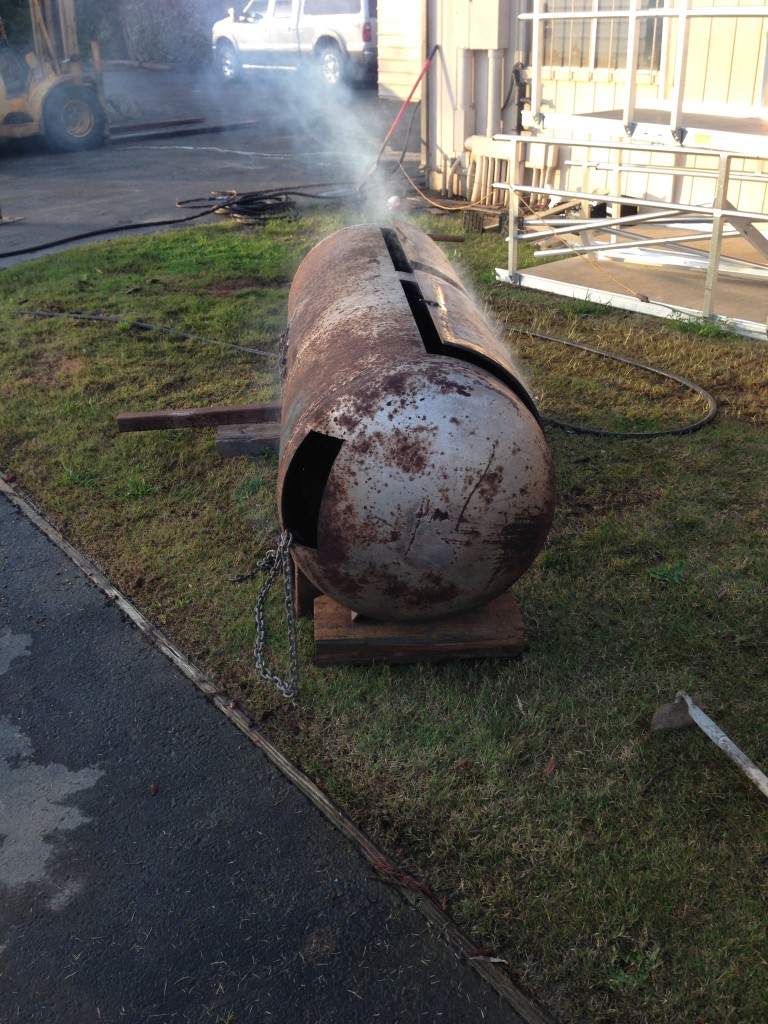 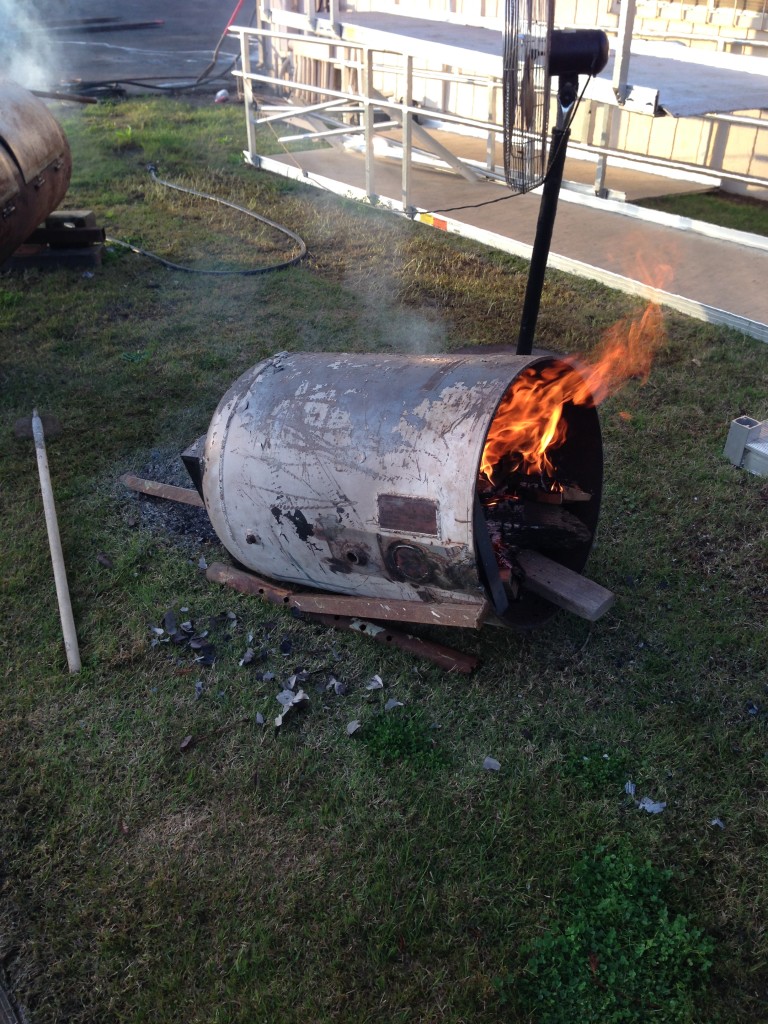 I then went ahead a welded on the the framing around the doors so that the smoke cannot seep out of the cracks around the edges. This took longer than expected since it was very hard to get the metal to shape to the doors. However, I was very pleased with the result! The only problem is the door warped out while I welded (as I expected) so I will have to bend them back to the correct shape so they fit snug against the tank again. 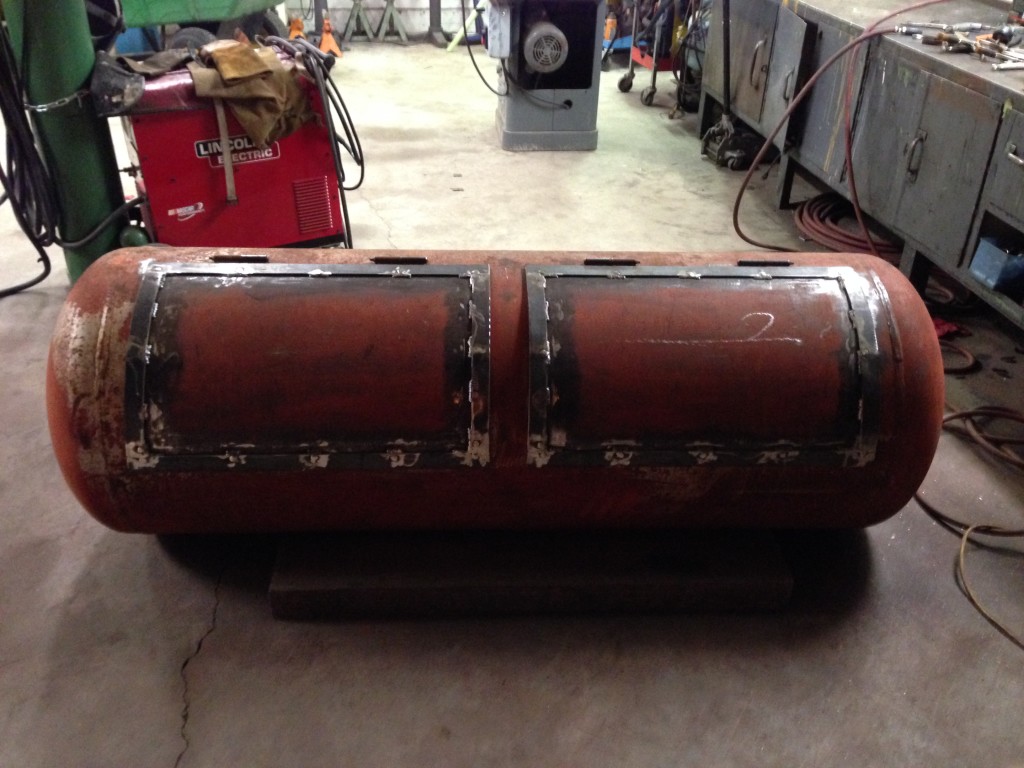